Recognizing there is a problem is the first step on the journey to finding a solution. In late 2016, the leadership at Meridian Behavioral Health (MBH) knew they had a problem with their learning and development programs. MBH is a Minnesota-based network of recovery and addiction treatment centers averaging approximately 1,000 employees in Minnesota. The majority of staff must adhere to a variety of training standards set forth by the state as part of a health regulations, as well as organizational training standards. Leadership assessed the state of training and identified a number of ways that the decentralized nature of their L&D department was out of date and inefficient.

The process was cumbersome, to say the least. Nearly all training was conducted in-person, at the local level, and was comprised of learning content created by individual branches. Learning content was inherently inconsistent, and sometimes rather dated. Providing accurate reporting was a challenge unto itself. Data was gathered from the local clinics and tallied on a spreadsheet that was saved to a single administrator’s computer. This file housed the entirety of their universal reporting capabilities. This presented issues every time state health auditors came calling to verify training was up to date. It was clear that the process needed improvement.

Dina Dupre, a Learning and Development Trainer at MBH, was hired and quickly tasked with improving the learning process. She selected Brainier to help accomplish that goal. Under her leadership the learning process was centralized through The Brainier LMS. With her background in instructional design, she created custom learning content, transitioning many courses to an eLearning delivery. This offered a higher degree of consistency in learning standards. Training was now easily repeatable and required drastically fewer labor hours. Within the LMS, timelines for training courses could be created with reminders put in place to notify learners when they are approaching deadlines.

Users were onboarded to the Brainier LMS, in part, by a custom “how-to” video that Dina created and assigned to each user.

Introducing over a thousand employees to a new learning platform took some planning. The roll-out included emails to employees, presentations, in-person demonstrations, and a fair amount of direct oversight to acclimate some learners that were resistant to change. Users were onboarded to the Brainier LMS, in part, by a custom “how-to” video that Dina created and assigned to each user. The same was done for each manager and administrator to familiarize them with the different tools, rights, and roles that they had in the LMS.

The LMS also became a central hub for all learning-related documents, reference materials, eSignatures, orientation materials, sign-ups for recurring in-person training opportunities, and a powerful reporting suite. This proved especially helpful for providing proof of compliance training for state health audits conducted by the state and the accreditation body. The auditor is quickly and easily provided accurate information on the training status of any staff member. The labor hours devoted to state audits decreased immediately, much to the delight of both parties. In prior years, if an employee was unable to provide proof of their attendance, MBH would be given a citation and the employee would have to complete the necessary training again. This led to lost time for the employee who is repeating training as well as the trainer required to deliver the content. This breakdown in reporting created workday disruptions across all MBH programs and several violations for the organization. 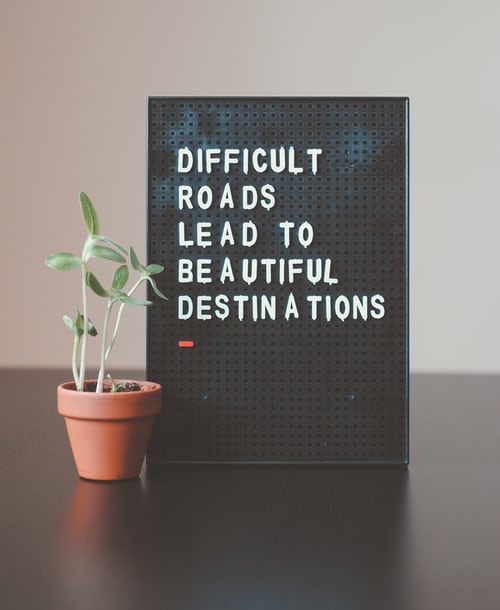 A little over a year after implementation of The Brainier LMS, Dina Dupre poured over the analytics of all the learning objectives and broadened her scope to examine larger organizational goals. It’s important to note that these numbers are primarily an examination of year-over-year changes. The slice of time here does not simply represent the roll out of the system to the entire organization, but the change in usage of the system by existing employees and new-hires. 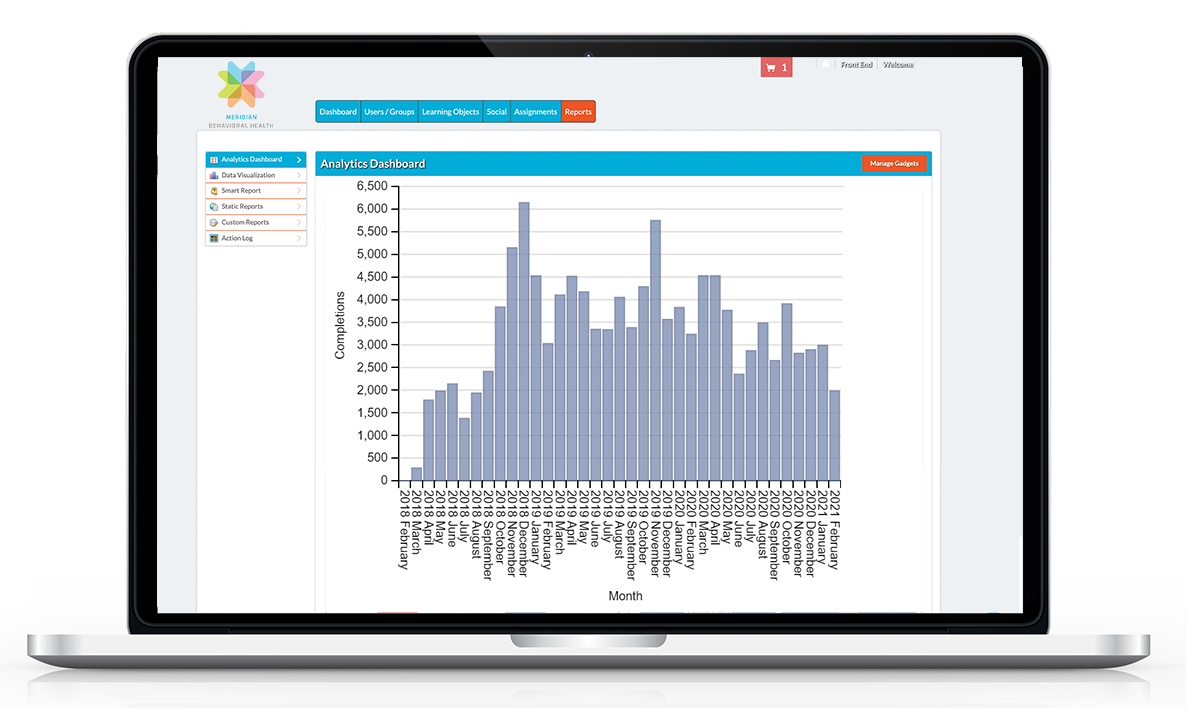 A cumulative look at completions. Note that training activity is not simply a year-end event, but a regular part of the MBH experience. This is due to the staggering of due-dates throughout the year, a shift in the culture to reprioritize learning as a necessary part of the job, and the workforce utilizing the LMS due to frequent usage.

After implementation, the remainder of the first year with the LMS was spent getting the teams acquainted with the new L&D process. Managers were brought on board first and convinced of the need for change. The culture of the organization shifted to embrace the platform for their training needs due to Dina’s careful planning for launch and her conviction to trust the process.

A mainstay in their L&D program is a CPR and first aid certification offered through the American Red Cross that employees must renew at regular intervals. Though MBH is not required to offer it, as employees are responsible to stay current on this particular certification on their own, the organization provides this training as a courtesy. Over time, the perceived value had eroded as attendance dwindled though sign-ups remained steady. Attendance records now flow through the LMS and absentee learners were now highly visible. Shortly thereafter, attendance rates hit 90%. Dina improved the employee value proposition by revealing an underrated benefit.

Staying on top of training deadlines is a constant battle without a centralized reporting engine. Keeping 1,000 MBH employees current on their training requirements was accomplished using a few tools in the LMS. Custom reports were automatically generated for learners nearing deadlines, email reminders were automated, recurring assigned training was automated, and traditional outreach from local managers kept learners on track. The state and accreditation body is concerned that training is completed within a certain time frame, and not simply that it has been completed. Utilizing the Brainier LMS builds in accountability. Managers and employees have prioritized meeting training deadlines. The data that the LMS provides makes the training portion of the audit process clean and easy. Reducing state violations due to tardiness is an obvious improvement, and one that ultimately reduces stress and negative attention for the organization.

The amount of learning objects grew in the LMS as users realized the versatility of the platform. Additionally, MBH continued to create learning content in-house and assigned to relevant groups. Assigned objects increased from 16,000 to 25,000 in a year’s time. A part of the success in getting and keeping users acquainted with the LMS was to stagger the renewal dates for learning objects throughout the year. Rather than facing a heavy curriculum at the end of the year, individual requirements were rolled out over several months to keep the traffic steady to the LMS. This reduced confusion among learners as they were quite familiar with Brainier.

Turnover in an industry like this is unfortunately high, as the demands of certain positions can be quite taxing. MBH has struggled with turnover, especially in entry-level positions, as can be expected. Dina took initiative by adding a portion to the onboarding process wherein she created specific learning content for these groups. Having once been in their position, the goal was to help guide them into the organization and into their role. Comparing turnover rates year over year, they found a decrease from 55% to 48% in a calendar year. Employee retention at this level equates to thousands of dollars and human capital saved. 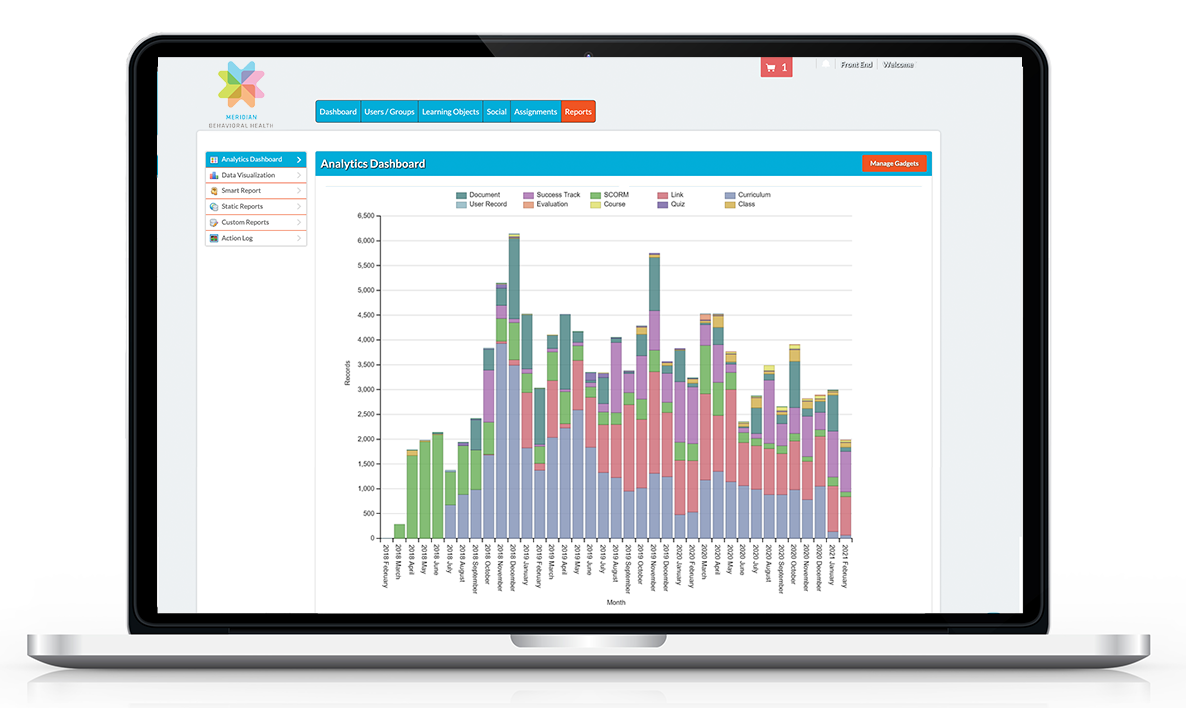 The Future of MBH

There are many miles to go for the learning and development department, especially as the COVID-19 pandemic proved to be a disruption for their organization. Thankfully, learning and development was poised to deliver learning content remotely via the LMS to combat the social distancing mandates. New challenges continue to arise for onboarding new employees and maintaining training standards for 1,000 others. And though there is much to do, the organization is certainly in a far better position because of the power of a learning leader, fueled by a passion and aided by superior learning technology.